When Android 6.0 landed, it brought a big new battery-saving feature called Doze mode. While it was great at reining in known troublemakers like social network apps and misbehaving games, Doze had a bad habit of knocking out apps with genuinely important roles to play. One such app was Android Wear. Today, a new update to the Wear companion app adds awareness of Doze Mode and prompts users to add it to the protected list. 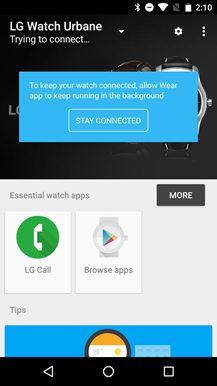 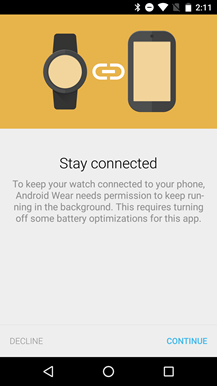 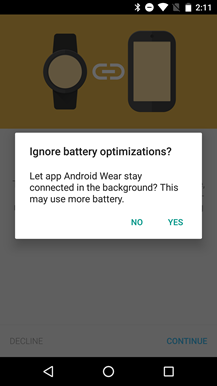 When the Android Wear app starts up for the first time after updating to v1.5, it will have a bright blue notice on the screen to let you know that your watch may not remain connected unless the Wear app is allowed to run in the background. Tap it and a one-page onboarding screen pops up to explain further. Tap the ‘continue’ button and answer the following prompt. This will add Android Wear to the list of apps that are “not optimized” by Doze mode. 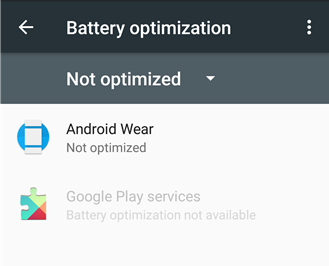 Why allow Wear to run in the background? Most of the communication between a Wear device and a phone is actually handled by Google Play services, which is automatically protected from Doze, but the companion app is still responsible for handling certain tasks like voice searches and replies. At least some of the issues with Wear losing connections and being unable to reach Google can probably be solved with this simple change.

There are two other little changes. I doubt they’re notable, but let’s mention them anyway. The first is sort of a teardown note, but it’s not big enough to warrant calling this a teardown. Support has been added for Casio’s upcoming Smart Outdoor Watch WSD-F10. To be more precise, it’s actually support for the Casio Moment Setter+ companion app. This is just a shortcut to open Moment Setter+ from within the Wear app, just like Motorola Connect, ZenWatch Manager, or any of the other OEM-specific companion apps. The app doesn’t appear to be in the Play Store, but the icon will probably look like this. 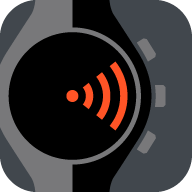 The other thing you might notice is a new card in the scrollable section of the main screen. It’s a promo card inviting users to follow @AndroidWear on Twitter. It should come as no surprise that tapping on it will open the Twitter app and immediately load up the profile. If you didn’t follow this account when we originally posted about it a couple of months ago, maybe now is a better time. 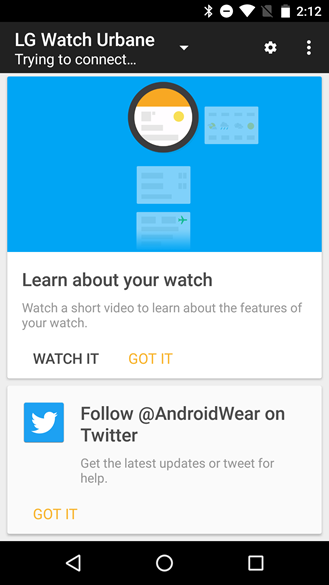 The APK is signed by Google and upgrades your existing app. The cryptographic signature guarantees that the file is safe to install and was not tampered with in any way. Rather than wait for Google to push this download to your devices, which can take days, download and install it just like any other APK.

* Note: This version cannot be installed on the Android N Preview because it was signed using a new and more secure method supported in N, but the new signature file was not included. >_

How to Hack Facebook, WhatsApp, and Telegram Using SS7 Flaw

Now Use Bold, Italics & Strikethrough in whatsapp to focus on content

Who is This Bollywood Star With His Younger Sibling?

10 Most Breathtaking Highways Of The World

PRIYANKA CHOPRA TO BE A JURY MEMBER AT TORONTO INTERNATIONAL FILM...