“From this standpoint, sanctioned by the experience of shrewd old nations, the foreign races in Hindusthan must either adopt the Hindu culture and language, must learn to respect and holding reverence Hindu religion, must entertain no idea but those of the Glorification of the Hindu Race And Culture, i.e., of the Hindu nation and must lose their separate existence to merge in the Hindu race , or may stay in the country, wholly subordinated to the Hindu Nation, claiming nothing, deserving no privileges, far less any preferential treatment – not even citizen’s rights. There is, or at least should be, no other course for them to adopt. We are an old nation; let us deal, as old nations ought to and do deal, with the foreign races, who have chosen to live in our country.” – “We Or Our Nationhood Definition” by MS Gowalkar 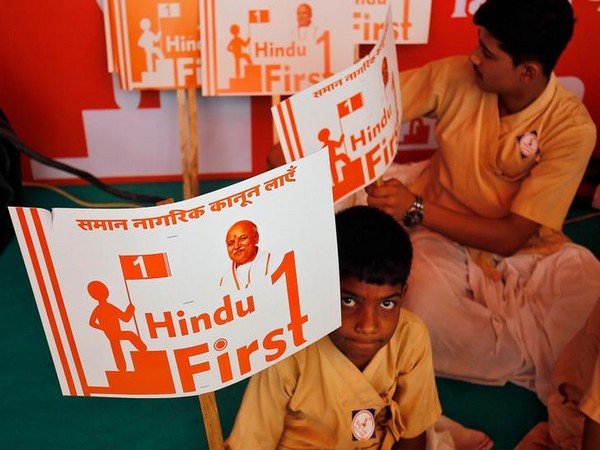 The ideologues of ‘Hindutva’ invoke providence and rummage through history and mythology to be able to pose as the heirs continuing all that was exalted and considered heroic in the past. The Hindus are entitled therefore to exercise authority, precedence and domination over others.

We are told that anyone can be an Indian – even a Muslim – provided they accept Rama as omnipotent and denounce Babur and his descendants as foreigners. At a rally in Amreli, Yogi Adityanath cited Ram Mandir as a prominent historic movement. The so-callled kar sevaks showed an impeccable support in restoring the Ram Mandir, the Hindu Nation and celebrated the destruction of the Babri Masjid.

One easily observable feature of Indian politics today, a consequence hastened by these recent developments, has been a clear shift in the central questions that agitate politics.

The ‘social’ themes have too prominently come to the fore and pushed the ‘economic’ ones relatively into the background. Why is the BJP today afraid of citing the glorious ‘Gujarat model’ of vikaas (development) or the heavily eulogised demonetisation? BJP leader Anurag Thakur had previously brought up Afzal Guru, Yakub Memon and JNU as a matter of provoking the people with hatred and gaining a vote bank premised on ‘nationalism’.

“But the League of Nations struck another note and formulated the now famous minority treaties – and laid down certain general propositions, which have been acclaimed as “the public law of the world.”  – MS Gowalkar

The whole world celebrated International Human Rights Day on December 10. The Indian state, however, can be questioned on its position on human rights and its protection of the rights of individuals. The foremost ideologues of the RSS were agitated with the inclusion of position for minorities and the protection of their fundamental rights by the Constitution as it did not include the laws of Manu. 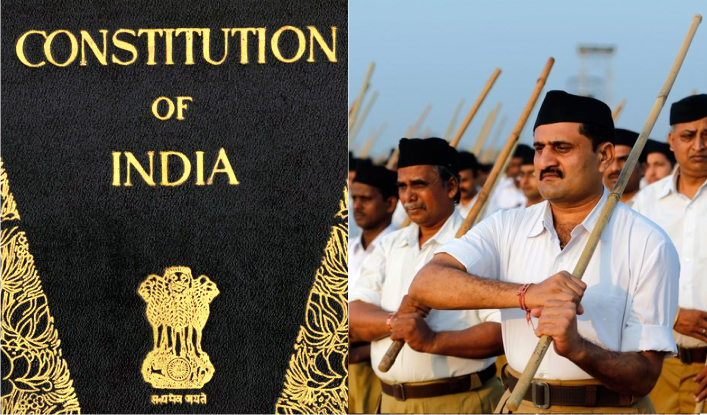 The openly declared viewpoints of many BJP leaders reflect the same mentality. Constitutional rights and supreme courts are detrimental to the their project of ‘the Hindutva nation’.

The murder of Mohammed Afrazul must remind us to think of the impact hateful views have on people. It would be dangerous to ignore the psychological factors involved in the hold which religious fundamentalists gain over masses of people, and their capacity for ideological hegemony over civil society. In order to prove their nationalistic bonafides, one needs to profess their loyalty to the Hindus and in the patriotic duty of destroying minority communities for the mission of an ‘Akhand Bharat’.

The migrant worker from West Bengal was hacked with a cleaver and then set on fire by Shambhulal Regar, who had the whole scene filmed by his nephew and has unapologetically demanded support from the Hindu fraternity.

Mohammed Afrazul joined the likes of Umer Mohammad, Pehlu Khan, Zafar Hussein, Mohammad Akhlaq, Junaid Khan – all victims of the onslaught on minorities in the name of ‘gau rakhsa’ and ‘love jihad’. In the light of Pehlu Khan’s murder wherein the accused received bail and Ravi Sisodia (accused of  the murder of Akhlaq) being projected as a martyr – his body being draped with the tricolour Indian flag – even Shambhulal’s demand for impunity might be granted by Hindutva politics. 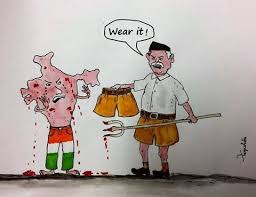 A favourable silence from the State on the gory events of increasing violence and atrocities on Muslims, Dalits, Adivasis and other oppressed sections persuades religiously charged groups to take law and justice into their own hands. Taking a reductionist position on the series of collective phenomena would diminish the acts as isloated instances of different individuals’ behaviours instead of drawing a coherent movement and relationship in the chain of events.. However, violence in society rises or falls mainly in response to changes in two factors: socially imposed control over motives and socially created opportunities to express these motives.

“The ideology of Hindu nationalism is being translated into the crude rhetoric of anti-Muslim slogans and wall graffiti, which, because of their capacity to fasten on to public memory, are becoming household sayings and threaten to reinforce the traditional vocabulary of communal prejudices with new abusive catch-words.” – Sumanta Banerjee, Economic and Political Weekly

Terms like ‘love jihad’ gain further credibility when the National Investigation Agency’s (NIA) attitude is to see if there is a larger conspiracy by terror groups to convert Hindu women to Islam and radicalise them.

Hadiya’s freedom becomes the whole nation’s concern. Hindu fundamentalist groups show an unceasing support to empty signs for political propaganda. It is dangerous to see the High Court and Supreme Court’s language in the case which lends indirect support to these hollow propositions of saving the country and its women from Islamic terror.

Shambhulal’s psyche had been clearly bombarded with these empty signs and symbols, which enabled him to conduct the brutal murder of the migrant Muslim labourer.

In the words of one of the leading contemporary moral and political philosophers, John Rawls of Harvard University, “Justice is the first virtue of social institutions.” He made that statement in his book “A Theory of Justice”, which was published in 1971. Some two decades earlier, it was proclaimed in the Preamble of the Indian Constitution that the democratic republic of India stood committed to securing rights for all its citizens – “justice, social, economic and political.”

It is noteworthy that the Preamble lists justice above the other moral political values of liberty, equality and fraternity. In the light of the current events, the word justice has become diluted in the nexus of politicians, businessmen and the other instruments of state.

Youth Ki Awaaz is an open platform where anybody can publish. This post does not necessarily represent the platform’s views and opinions.

Trending onlinenews - January 16, 2018
0
A dramatic scene of a Georgia firefighter catching a child dropped from an apartment fire...

Trending onlinenews - January 16, 2018
0
Simeon Kerr in Dubai and Ahmed Al Omran in Riyadh January 15, 2018 The Ritz-Carlton hotel in Riyadh, which was converted into a luxury detention...